I’m going to tell you the thing no one says. All of those churches and piazzas start to look the same. Id visited many Roman monuments but when someone pointed them out to me, I honestly couldnt remember. Thats not to take away from their beauty. However, if youve seen one ornate church that a tank top in sweltering heat is too revealing for, youve probably seen them all. No sightseeing for me not this time.

My friends said to me that my visit to Rome was like a squirrel storing chestnuts for the winter. Its a little true. I felt like I had to get all the dating in that I can before I go home to handsome, accomplished men that have no interest in me unemployed mamas boys that are looking for a sponsor, and unattractive men that I am still not desperate or broke enough to dig.

Resultantly, I am starting to become a pro at tindering and dating abroad. I usually start swiping before I even reach my destination as I did in Rome. But Italian guys are different. They are clichéd as aggressive sexually and I have found that to be fairly accurate. Often a mutual swipe right resulted in Ciao! Sex? *Sigh*

My first morning in Rome,  I met for coffee with an old male married friend and when I complained of his fellow countrymen’s thirsty teenager behavior he suggested I try more serious dating apps. However the one he suggested no longer exists. (Serious married folks completely disengage with singledom) So I ventured onto okcupid in addition to tinder and badoo.

The messages were a little less aggressive. I even messaged with a handsome guy that after a couple of sentences realized he met me before with my friendhis ex-girlfriend in Roma. I realized this city is small.

I matched and chatted with a few guys. They would ask to see me, but wouldn’t follow through. The wistful artist with political aspirations, the stage singer with the sharp intellect. There was even a guy I sent my Whatsapp contact information only to receive a message from him with a couple as the profile picture. “Are you married”? I asked. “Of course he said, but my wife and I have an arrangement”.

Then there was the guy that was a little over eager. “I want to see you now”, he text me like a two year old testing boundaries. “No, I am busy”. “Niger”. he replied. I think he meant the racial slur and not the African country.

One night I went to a bar with friends and a tall, handsome man sat beside me and chatted me up and the time whirled past. He lived in Geneva and like me was vacationing for the holiday. Lanky and chiseled he explained that he was in private equity and shocked that I understood. I have an MBA, of course I know what it is. My friend suggested we go to a club and he and his friend followed.

But I should have known he was a douche bag. My friend was connected and instead of waiting in the sea of people for entrance, she sent a text and we were miraculously ushered through to a private table. But we had to pay for bottle service. The Swiss balked. My friend suggested he go back outside and continue to wait to get in, but he didn’t hear her. Ultimately, we all split the bar tab…evenly.

The club was awesome and had several rooms of altering house and hip hop. I don’t think I’ve ever been disappointed by a European club. But at the end of the night after dancing suggestively and much heavy petting, dude was like, “goodnight”. Didn’t ask for my number, email, myspacenothing.  I was ok with this but I was pissed he had monopolized my time at the club. I could have met other guys.

Roma was proving romantically frustrating. Tons of gorgeous men, but many lacking any real or even fake depth -at least in my random sample size. So I adopted a quantity approach. As always I only talked to men online that sent me messages first. I tweaked my profile to explain explicitly that I was not looking for sex. So the messages began to get a tad bit better. Once we exchanged a few sentences on Tinder, then on to Whatsapp. If he asked me out, I would tell him to make a plan.

That was a heck of a filter.

The guys who actually said I will meet you at x place at x time self selected themselves and I had fun.

There was the super good looking 6’2” Armani model looking, suit wearing, camera guy. We met during his lunch break. His chiseled looks were easily surpassed by his vapid nature. There was zero chemistry although he asked to see me again and tried for a kiss. Again with the scent. His pheromones were not doing anything for me.

Then there was the really sweet IT guy that if this was an 80’s movie would have been played by Steve Gutenburg…from “Police Academy”. We had a lovely few cups of coffee as he explained the app company he ran and his associated travels. Sweet as Patti Labelle’s pie is nutmeggy. Interesting and nice but as Carrie Bradshaw would say, no “za za zoo”.

I was exhausted and teetering dangerously close to carpal tunnel from all the swiping. Then I met the former professional soccer player.

Earlier in the day found me lunching with friends that have relocated to Italy. I was supposed to go on the blind date afterwards. The lunch became an early dinner and I broke away to meet my date. He was late. Really, really, late. I almost left because I was tired and after consecutive disappointments it was hard to get excited. But curiosity kept me firmly in place.

I walked to our designated meeting place, across the street from the coliseum. That place will always be eerie to me. Hundreds of men battled and died there for sport, and now it’s a tourist attraction and the backdrop for my “meet cute”.

He text me and as I looked up, a tall, handsome man looked up with a little kid on Christmas grin. “La-Triz”! I walked up to him and gave the customary two cheek kiss. He smelled fantastic. I literally inhaled his scent.

We walked up the stairs to a restaurant overlooking the coliseum where we had appertifs and appetizers. His English wasn’t great, my Italian is non-existent. Lots of Google translator. And it was ok. His eyes were big and soft on the corners and kind. I played it cool, but inside was totally swooning.

He’s an architect that had ended a long term relationship earlier in the year. We actually had lots in common including real estate and large dogs. I’m always a sucker for a man with a dog.

After drinks, he took me on a tour of the city. We went to the Vatican and I saw the most beautiful nativity seen I have ever seen in my life. Then he took me to Aventine Hill which has a keyhole that offers a perfect view of St. Peter’s Basilica. When you look through you are supposed to make a wish. I’m not telling!!!

Afterwards, we had an intense make out session in his car. No sex. But lots of kissing. In the middle of making out, he literally screamed, “Thank God for Tinder”!!! I laughed hysterically and was literally and figuratively breathless.

But I still had one more day in Rome. So the next day found me having lunch with a Barbadian at of all places, Eataly. I had been in Chicago and New York, but this place was the size of an Ikea. I had I think the best rotisserie chicken I have had in my entire life.

The architect had asked to see me again. He had soccer practice because he still plays in a nonprofessional league and has the absolutely flawless physique to prove it. When I opened the door and saw his sexy smile and warm eyes, my stomach did a little somersault. He kissed me and it was electric. I allowed my feet to be swept. He whispered in my ear in Italian. I melted like gelato on a Piazza during July.  He kissed me with intensity without breaking eye contact which is for me the sexiest way a man can kiss.  The desire was thick and swirled about our bodies. This time in Rome was beginning to look up.

We are still talking and texting now that I am back home, but even at my advanced age, I am continuing to learn to protect my heart and be realistic.  After all, Rome wasnt built in a day 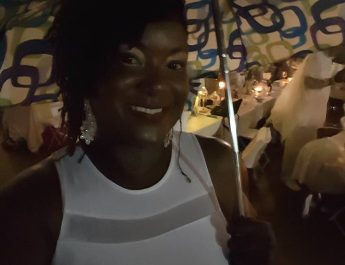